GBP plunges on decision by the Bank of England (BoE)

On Thursday, the BoE decided to cut its key rate to 0.25%. This is the first rate cut in almost 7 years. The BoE also decided to increase its QE to 435 billion pounds. The Bank said it is prepared to provide more stimulus if necessary. 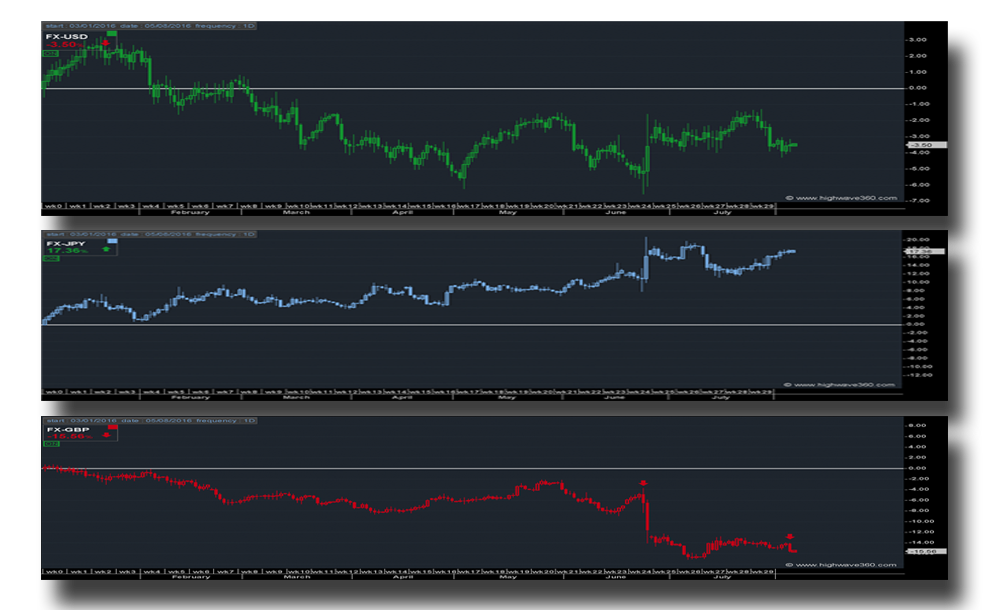 Since the Brexit referendum, British growth outlook on the short and medium-term have declined significantly. Business investment and household consumption are lower and will weigh on growth. That’s why the BoE has reduced its growth forecast for 2017 to 2.3% and to 2.3% for 2018.

However, the BoE revised up its inflation forecasts: the inflation rate should reach its target of 2% in the last quarter of 2017, against the second quarter of 2018 in the previous forecast in May.

The Australian dollar held its value despite the RBA’s decision, which once again reduced its interest rates last Tuesday. The RBA decided to lower its rates by 25 basis points to a record low of 1.50%.

Despite the strong growth in Australia over the year to the March quarter (3.1%), the RBA decided to cut interest rates to counter the weakness of its economic partners and deflationary pressures, with the inflation level (currently 1%) far below from the RBA’s target of 2% -3%.

The Japanese currency is still (too) strong

Last week, the Japanese Central Bank (BoJ) kept its negative interest rate on a portion of deposits but increased the amount of its ETFs purchase program (Exchange-Traded Funds): from 3.3 trillion YEN to 6 trillion YEN a year.

A few days before the BoJ’s decision, the Japanese government announced a stimulus plan, whose details were unveiled last Tuesday. The plan must now be voted on by the Parliament in September.

On Tuesday 2nd of August, the International Monetary Fund (IMF) published a report on Japan highlighting the risks of very low growth and high debt levels. The IMF pointed out “the need to chart a credible course for fiscal consolidation” so then it could reduce the country’s debt. Growth for 2016 is expected to only 0.3% by the institution. The IMF also put forward the need to implement structural reforms to improve the productivity of Japanese companies and growth potential.

Last Friday’s US GDP data was below expectations, with growth in Q2 at 1.2% (forecast: 2.6%). The growth for the first quarter was also revised downward to 0.8%.

The decline of the US dollar reflects the diminishing prospects of another rate hike this year, in the face of slower growth. Today, investors will also monitor the July’s employment report. They will look at the jobs creation numbers as well as wage developments to monitor inflationary pressures.

US dollar © forexop
Continue...
No Comments