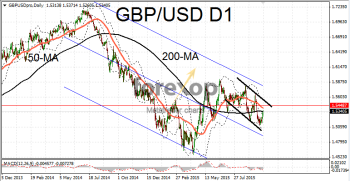 The Bank of England held tight again this month with a vote to keep interest rates unchanged at 0.5 percent.

Few analysts see tightening getting underway before next spring, but any delay by the US Federal Reserve is likely to push this timeline out a bit further.

Cable initially dropped after the Bank’s announcement, falling from 1.5371 down to an intraday low of 1.5260. Both the ECB and the Bank of England’s policy statements warned of increasing downside risks to inflation. This turned sentiment in the market bearish but the steep falls pulled in more buyers (cable was already significantly oversold).

Subsequently GBP/USD rallied up to the resistance point at 1.5362 after release of the Federal Reserve’s minutes thus retracing most of the previous fall. A break above 1.5405 would indicate that the current move has some more upwards momentum. The risk though is that this latest leg is a bearish rally that could reverse on meeting the top of the range (see figure) – as the other rallies have done. Current fundamentals point towards range bound trading for cable for the time being.

The pound also moved higher against the yen taking GBP/JPY up to 183.87. Sentiment in the yen turned lower after a disappointing business survey came in overnight. The Eco Watchers survey fell sharply to 47.5 in September from 49.3 in August. This marks its lowest point in eight months.

Speculation is also rising that the Bank of Japan will need to increases its monetary stimulus by year end in order to fulfil its ambitious growth and inflation targets. An improving outlook in Chinese stock markets has also deprived the yen of some of its inflows which had kept it well supported over the past weeks.

EUR/GBP reversed its rally on the Fed’s statement moving as low as 0.7358. The euro was also softer after some very disappointing trade figures from Germany which showed a marked slowdown in exports.