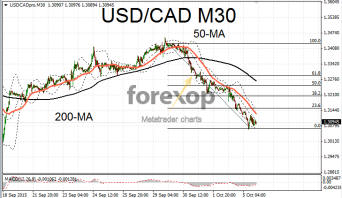 A recovery in GBP/USD was set into reverse on Monday on further evidence that the UK economy is cooling. The services sector, the main cornerstone of the economy, weakened significantly in September.

According to Markit the purchasing mangers’ index fell to 53.3, missing forecasts by 2.7 points. More importantly the latest figures highlight a steep four-month decline across the services industry. The index peaked at 59.5 in May. Markit estimates that the latest figures suggest that UK GDP slowed to 0.5 percent in the third quarter.

Cable was taken back down to the mid-1.51 range. This came after an early break to 1.5243 faded as news of the latest services reports hit the wires.

GBP remains in a bearish frame as markets digest each data release that seems to be indicating the British economy slowed decisively in the summer. Further to this the poor US jobs figures on Friday also dimmed the prospects of early rate rises from the Bank of England. EUR/GBP rallied sharply on the news but gave up some of those gains today as sentiment towards the single currency waned. After reaching 0.74 EUR/GBP still remains close to a two month high.

Commodities were in a better mood today as traders bet that US interest rates would be held near zero for longer than expected. Brent crude oil was trading back up towards the critical US$50 seeing its most bullish day in three weeks. Metals also rebounded on hopes of higher demand in emerging economies.

CAD/JPY rallied by one percent to 91.97 extending a powerful one week rally. USD/CAD also tumbled back towards the 1.30 line. This comes after the pair was trading near an eleven year highs around 1.3450 last week.

Likewise Australian dollar and New Zealand dollar were bullish with both dependent on the natural resources sector. AUD/USD was firmly above 0.70 after managing to move up against a brutal downwards trend. NZD/USD was in similar spirit and managed to stage a powerful upwards move up to 0.6503 after recovering nearly five percent off recent lows.