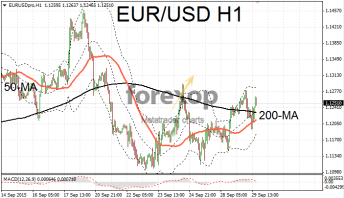 The euro recovered from early losses with a late rally.

Setting the tone for the day, Germany’s inflation figures came in far below what most economists had expected. Yield on government bonds fell after it was reported that the harmonized index of consumer prices dropped to an eight month low with a reading of minus 0.3 percent in between August and September.

The decline over the past twelve months now stands at minus 0.2 percent. The latest data led traders to speculate that the ECB may be forced to ramp up its stimulus measures to prevent the Eurozone from falling into a damaging and prolonged period deflation. The central bank is already adding 60B euros per month in bond purchases giving much needed life support to the fragile Eurozone economies. Sharply falling commodity prices have been the main reason for bigger than expected price falls.

EUR/USD rallied back above 1.12 after the inflation figures were posted. This came as a relief rally as many traders had anticipated a ver weak inflation report. This because of the sharp falls in energy and raw materials costs. EUR/USD rose up to 1.1268 meeting resistance at the first pivot level.

The dollar was trading up against the yen, and remained largely flat against the British pound. US consumer confidence failed to bring much buying interest for the greenback. Investors and traders alike continue to focus on the global economy and news flow from China. Furthermore jobs data looms on Friday. US consumer confidence rose to its highest level since the beginning of the year. The Conference Board said on Tuesday that its confidence index rose to 103 in September. Up from 101.3 a month earlier.

Some mildly negative news came in the form of weaker home prices. S&P/Case-Shiller Home Price Index came in just below the forecasted reading at an annual 5.0 percent in July.

USD/JPY remained just beneath the 120 level – unable to make a convincing break higher. Japanese retail trade numbers are due later today and are expected to show a 1.1 percent annual increase to August.

The dollar was flat against the British pound as traders waited nervously for a scheduled speech from Bank of England chief Mark Carney.