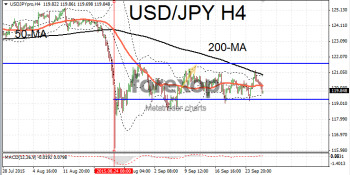 The US dollar moved sideways against most pairs today. The greenback edged up on the UK pound but slipped against the yen and euro.

A mixed set of economic data kept the US dollar treading water. Consumer spending in August came in above expectations according to latest figures. The Department of Commerce reported a 0.4 percent lift in spending between July and August. Analysts had expected a slight drop to 0.3 percent on the previous month’s figure. July’s number also came in at 0.4 percent after its upward revision. Core personal spending, which removes highly volatile items, came in at an annualized rate of 1.3 percent.

US Economy Picks Up

The latest data is additional evidence that the US economy picked up pace in the third quarter. Last week’s GDP numbers confirmed that the economy grew at a faster pace than previously thought. Growth was revised upwards to 3.9 percent from 3.7 percent. The dollar also received a boost after several Fed members said that US interest rates are on track to rise this year.

On the other side of the coin personal income came in just below forecasts with a 0.3 percent rise on the month. Disappointment also came in the form of a weak report on pending home sales. Month on month “pending home sales” fell by 1.4 percent in August according to latest figures from the National Association of Realtors. Analyst had expected a rise of 0.5 percent. Affordability was seen as the main reason as buyers struggle to find affordable properties in their areas.

USD/JPY fell back below the 120 barrier. The pair has been range bound between 119.2 and 121.5 for much of the past month. The yen was trading higher as a safe play after fears of the health of the Chinese economy were once again in the spotlight.

Euro Higher after Mixed US Data

EUR/USD recovered from midday onwards after the US economic releases were released. The US data was not seen as strong enough reason to buy up the greenback which is already at historically high levels. Jobs data is due on Friday and activity is often subdued leading up to this event. Nonfarm payrolls are expected to rise by 203,000 in September. Wednesday’s ADP jobs report is forecasted to show that the private sector added 195,000 jobs last month.

For the euro, a batch of important data releases are due midweek. Germany’s retail sales are expected to have risen by 0.2 percent in August. Consumer inflation for the Eurozone is projected to show that prices haven’t changed on the previous year (zero percent). German consumer inflation figures are released on Tuesday. The preliminary harmonized index is expected to fall by an annualized 0.1 percent to September.