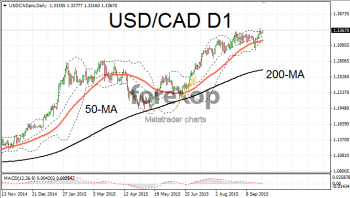 Commodities opened the week on a bearish note. Crude oil futures tumbled one US dollar to $47. Copper and other industrial metals also resumed their persistent downwards trajectory.

This came as traders began to fret once more over the impact of a slowdown in China on the world economy. They were also braced for another set of economic reports due on Thursday. These should shed light on the health of the country’s manufacturing sector. The purchasing managers’ index for September is expected to remain firm at 49.7. The Caixin index is expected to firm slightly to 47.2.

The Canadian dollar slipped against the greenback allowing USD/CAD to break above the 1.33 resistance line. USD/CAD is trading at the highest extent of the upwards channel. The US dollar is now testing eleven year highs against its Canadian neighbor.

The “loonie” didn’t gain any respite with the Japanese yen either. CAD/JPY extended a four day downwards rally and was testing one week lows at 89.57.

Both the Australian dollar and the New Zealand dollar lost ground for the session. AUD/USD failed to defend the 0.70 support level and quickly descended into the 0.69 range again. The downwards push has been relentless as the dollar extends a strong bearish trend. Each minor upwards move is met with strong selling pressure.

The New Zealand kiwi was also in a depressed state. NZD/USD was trading at 0.6332 – remaining firmly at multiyear lows. The pair has endured a virtually unbroken downwards trend for the past five months.