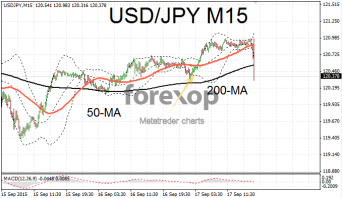 The Fed leaned on the side of caution today and kept its target overnight interest rates on hold.

This FOMC meeting was the first in nearly a decade in which the decision to lift rates was considered “finely balanced”. The Fed committee opted to hold rates steady citing concerns over the stability of the global economy. Though global risks seem to have been the deciding factor –the Fed has not ruled out a rise later in the year.

The dollar had already started to sell off in early trade. US bond yields dropped steadily throughout the day as traders began to feel that Yellen was not going to move after all.

EUR/USD rallied after the news reaching the top of the 1.13 range in erratic trade. GBP/USD also extended its rally further towards 1.56.

USD/JPY retreated back down towards 120.3 giving up half of one percent.

Not surprisingly the day was dominated by the Fed’s rate decision. Other economic news didn’t receive its fair share of attention. The weekly jobless claims fell to 264,000 last week registering a drop of 11,000 on the week before and marking the lowest number of claims in eight weeks. The data offered further evidence that the US jobs market is firing on all cylinders. The claimant count remains well below the 300,000 threshold – this seen by many economists as a sign of a healthy labor market.

On the negative side the US housing market appears to be cooling off according to latest figures. A Department of Commerce report today showed housing starts were three percent below market forecasts. The annual rate fell to 1.126M units to August missing the projected number of 1.17M. However new permits rose which suggested that demand may be higher going forwards.