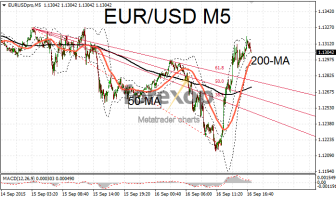 The dollar suffered a sharp sell off today after a set of surprisingly weak inflation figures.

The euro, pound, Canadian and Australian dollar all broke strong gains on the greenback. Sterling received an additional jolt after some strong earnings data.

Consumer inflation as measured by the CPI fell by 0.1 percent in August. Figures released Wednesday by the Department of Labor showed inflation narrowly missing the market’s forecast which was for the rate to remain at zero.

The fall was put down to lower gasoline prices as well as the falling costs of imported goods due to the stronger dollar. Core inflation, which strips out energy and food, also missed forecasts after remaining unchanged from July’s 1.8 percent annual rise.

This is the first time since January that consumer inflation has been negative. The downward trend is also a cause for concern. However with the core inflation remaining stable the Fed may be less troubled about this than first seems.

Fed fund futures were implying a 23 percent chance of a rate increase at tomorrow’s meeting. This marks a fall of 2 percent since yesterday. Polls carried out by Reuters and CNBC showed economists are evenly split over whether the Fed will opt to begin raising rates during this meeting or wait. Strong arguments exist on both sides. As other Central Banks, the Federal Reserve may be less concerned over weaker inflation because the effects of falling fuel costs will only be short term.

EUR/USD surged back above of the 1.13 level on the release of the US inflation figures – seen as strongly influential to this week’s meeting of the FOMC. The disappointing numbers helped the euro to bounce back from yesterday’s dismal ZEW investor survey. Despite today’s rise inflation figures from the Eurozone gave traders few reasons to cheer. Core inflation was lower than expected with an annual increase of 0.9 percent. This missed the forecast of a one percent increase. Falling fuel costs were again the cause.

Some traders saw the weak numbers as increasing the chances of the ECB expanding its stimulus program – which it has already hinted at during its last meeting.

The dollar held up against the Japanese yen meanwhile which has seen buying interest fall off as risk concerns ease back. USD/JPY made a small gain but more importantly managed to remain above the 120 support level. Also hurting the yen was a rebound in crude oil and commodities.