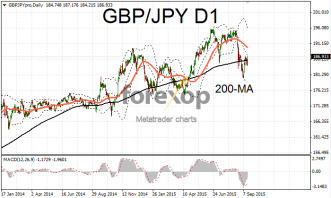 GBP/USD rallied over 1.55 in early trade after some of robust earnings and wage data.

Average UK earnings came in with a 2.9 percent gain in July over the prior three months. This was well ahead of the economists’ forecasts of 2.5 percent. After several years of stagnation, wages now appear to be rising much more rapidly than had been predicted.

This will certainly put upward pressure on inflation and increases the case for the BOE lifting interest rates sooner rather than later.

Other good news came in the form of a fall in unemployment. The headline rate fell to 5.5 percent in July from 5.6 percent a month earlier. Traders were also relieved after Bank of England governor Mark Carney said that China’s slowdown would likely have only a modest impact on the UK economy.

GBP/USD burst over the 1.55 level briefly after rallying more than one percent. Soft inflation data from the US gave sterling an extra tailwind today and saw a good amount of buying interest develop. Cable remains heavily overbought though on the shorter time frames. On the hourly and sub hourly charts the MACD indicator (at 12,26) was flashing a sell signal.

After consolidating at the top of the 1.54 range traders were testing resistance at 1.55 for weakness. Today’s move has seen cable retracing back to the 62 percent Fibonacci level following the slide which began on Aug 25.

The pound also rallied strongly on the euro and the Japanese yen. GBP/JPY lifted back to 187 reaching a one week high. EUR/GBP fell one percent to 0.7385.

Commodities bounced back today helped by the weaker US dollar. Crude rose back to test the $50 per barrel mark after weekly inventories data showed a bigger than expected decline. The Australian and Canadian dollars both saw sharp gains against the US dollar and the Japanese yen as a result.