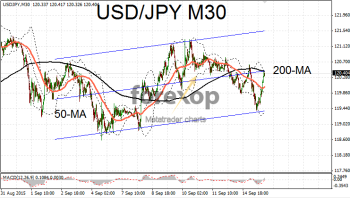 US retail sales slowed in August recent figures suggest. The disappointing data added to uncertainty ahead of this week’s meeting of the Federal Reserve which could potentially see interest rates rising for the first time since 2006.

Retail sales stood at 0.2 percent in August according to data released by the US Census Bureau on Tuesday. The number came in at the lower end of expectations. After stripping out the volatile “auto and fuel” categories the core retail sales were up by just 0.1 percent on July, narrowly missing the 0.2 percent forecast.

Chance for a Rate Hike?

Despite the retail numbers the dollar was trading higher across most pairs on Tuesday as traders started to increase bets that the Federal Reserve might opt to begin raising rates this meeting. Yields on longer data US treasuries increased as markets began to price in the potential for a restrained interest rate rise. Interest rate futures also followed the sentiment with current prices implying a 25 percent chance of a rate hike this week.

On the agenda for the Fed, as well as the recent health of the US economy will be the potential wider impact of a rate increase on the global economy. Risks and uncertainties certainly exist. But if the Fed doesn’t act soon it risks being caught in a never ending wait for perfect conditions that might never arise.

For this reason the chances of a rate rise could actually be higher than markets are predicting. A hike now would also send a clear signal that the US economy is in good shape – ending a long period of uncertainty on when the tightening will actually begin. Both the IMF and World Bank have warned recently of potential impacts on emerging economies.

USD/JPY rallied strongly to meet resistance around the 120 area. The yen began to give back some of its recent gains this week as markets are generally more upbeat and are taking a more benign view on global risks. The Bank of Japan kept is monetary policy unchanged this week opting to maintain its stimulus at 80 trillion yen per yen each year.

The dollar was also trading up against the euro and the British pound.