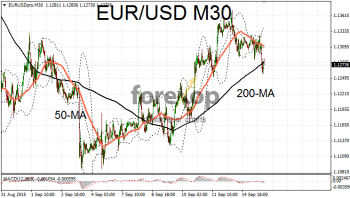 EUR/USD tacked lower for a second day reaching as low as 1.1257. Traders were selling into rallies which drained EUR/USD of any upward momentum for much of the day.

EUR/USD continued its descent which began yesterday and was meeting support at 1.1281 and 1.1257. Few were prepared to short the dollar ahead of the pending Fed decision.

As well as the impact of the Fed meeting, traders were also reflecting on some mixed data from the Eurozone. German’s ZEW Economic Sentiment index slipped for the sixth month in a row in August. The index stood at 12.1 for the month – well below the reading of 18 that was anticipated. The survey polls a large number of investors and is closely watched as a barometer to the health of Germany as well as the entire Eurozone.

Confidence has dropped in recent months after many investors predict that turmoil in China and emerging markets will lower demand for Germany’s exports. The poll also suggests investors are less optimistic on the outlook for the rest of the Eurozone. Sentiment plummeted to 33.3 from 47.6 one month earlier.

GBP/USD Down after Weak Inflation

The British pound was also feeling the strain on Tuesday after some disappointing inflation numbers. The core consumer price inflation (CPI) increased by an annual rate of 1 percent in August. When the prices of food energy are included, prices were static on the year. Factory gate prices were at the lower end of forecasts. Core PPI was up just 0.1 percent in August on a year earlier.

Cable (GBP/USD) began a steep descent below the 1.54 line after the morning’s economic releases. GBP/USD found support around 1.5346 at the 200-day moving average. However buying interest was tepid with few traders wishing to short the dollar ahead of the Fed’s decision later in the week.

Weaker house price growth also dampened sentiment towards the pound. Annual house price inflation came in at 5.2 percent versus an expectation of a 6.2 percent rise. With property playing an important role in the economy and indirectly the Bank of England’s rate decisions, sterling often reacts to data from the housing sector.