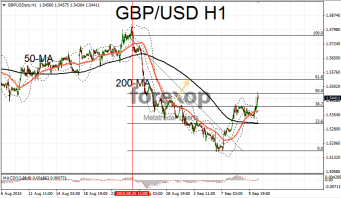 Cable extended a strong rally today as traders welcomed a neutral statement from the Bank of England’s monetary policy committee.

Interest rates were kept fixed at 0.5 percent – a decision that was widely anticipated. The committee voted 8-1 in favor of keeping rates on hold.

The Bank also lowered its forecast for growth in the third quarter to 0.6 percent after factoring in a slowdown in UK manufacturing activity. The downward revision wasn’t a surprise as it simply reflected data that was released earlier in the month. Markets took a positive view however and sterling rallied strongly against the dollar and yen, but was flat against the euro.

Sterling also received an early boost after data showing that domestic property prices rose ahead of forecasts in August.

GBP/USD made a powerful upwards move pushing towards the middle of the 1.54 area. The pair has now retraced fifty percent of its abrupt fall that began at the end of last month. Much of this move has been due to a realignment of positions as concerns over China take a back seat. Chinese stock markets have stabilized somewhat following several interventions by authorities. As such investors’ fears that the Chinese economy is headed for “hard landing” have eased in recent days.

Other aspects of the UK economy remain strong so the fundamental outlook for sterling is positive. Employment is rising and wage growth is starting to accelerate after several years of stagnation. The services and consumer sectors also remain upbeat. The next big event for “cable” will be next week’s meeting of the Federal Reserve. Like the Bank of England, most economists are expecting the Fed to take a cautionary approach amid the recent rise in global risk factors – prominently China and emerging markets.

The pound also rallied against the Japanese yen – for the reasons given above. GBP/JPY jumped by nearly one percent briefly breaking above the 187 level. The rise in yen was seen as “overdone” by many traders and today’s correction took the level back up towards the 200-day moving average which has been rising steadily for the past two years.

The euro had a positive day and that helped to keep EUR/GBP from a deeper selloff. EUR/GBP was trading above 0.73 with the euro being lifted by a more risk tolerant environment.