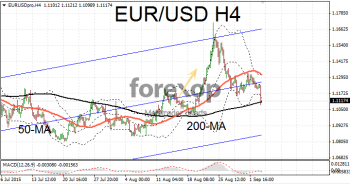 The ECB’s meeting today offered a surprisingly bearish outlook for the euro.

ECB chair Mario Draghi’s forward assessment for the Eurozone proved to be far more downbeat than markets had expected. In his statement, Draghi predicted that inflation will remain subdued for “some years” to come and that this is likely to be a threat to future growth in the Eurozone.

Interest rates were kept fixed at 0.05% as widely expected. However Draghi hinted that the European Central Bank’s 60B euro monthly asset purchase program, designed to stimulate inflation and growth, may need to be expanded.

The euro fell sharply as did yields on most European bonds. The benchmark 10-year German bund fell to 0.72 percent after opening the week at 0.79 percent. Draghi’s comments reignited fears in the market that the Eurozone may be headed for a sustained period of low growth and falling inflation (or even deflation).

Risks from China and Commodities

The main causes for the downward revision to growth were the deflationary effects of falling commodities prices and slowing global growth cause by China.

The threat of more “money printing” is likely to weigh heavily on the euro. EUR/USD saw another day deeply in the red. The pair fell to 1.1105 where support was met at the 200-day moving average. The euro also fell sharply against the British pound and the yen.

There were few bright spots for the euro today other than some upbeat reports on the European services sector. Markit’s forward looking purchasing managers’ index came in just above expectations at 54.4. The higher reading was mainly down to strong activity in the German services sector.

EUR/USD looks set to remain under pressure unless tomorrow’s jobs reports from the US proves to be well below expectations. Wednesday’s forerunner, the ADP national employment report offered a “heads up” coming in just under expectations.

The US dollar rallied for a second day against a basket of six major trading currencies. Gains were mostly down to moves versus the euro and the British pound (following a disappointing outlook on UK services).

USD/JPY slipped back below the 120 support level. The yen is currently well supported as a “risk-off” play and as such the greenback is struggling to gain any upward traction.