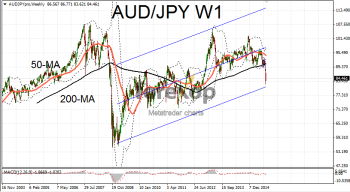 The Australian dollar suffered a further blow today after the government’s official figures showed that GDP was much weaker in the second quarter than expected. GDP rose by 2% on the quarter a year earlier.

Second quarter growth was just 0.2 percent higher than the previous quarter. The forecast was for expansion of 0.4 percent. The lower reading was due to a sharp slowdown in the country’s mining and construction sectors. The dominant mining industry has struggled to adapt to the dwindling demand in China.

AUD/USD was hovering around the 0.7 level after briefly dipping into the 0.69 range.

The Australian dollar has already seen a steep selloff following the weakness in the commodities sector and the impact that is having on the economy. The silver lining however is that depressed level of the Aussie will now assist the country’s exports and add lift to the economy. The RBA has long stated that the currency is overvalued. Recent moves have pushed the rate towards more competitive footing.

AUD/JPY is still languishing at three year lows. This high yielding pair has been a popular carry trade over the last year, but outflows back to the yen have seen sharp loses recently. Those brave enough to call the bottom are likely to see excellent long-term returns once the Australian economy builds momentum and rates begin to rise. Though, this is not likely to happen in the near-term.

Crude oil suffered another bumpy ride today tumbling nearly four dollars and erasing yesterday’s gains. A strong inventory report together with a dose of heavy “profit taking” were enough to send Brent back below the 50 dollar mark.

The weekly inventory report showed an unexpectedly large rise in US supplies of nearly 4.7M barrels. Analysts had expected levels to remain fairly constant for the week, so the data came as a blow to those on the bullish side. Oil futures had rallied some twenty five percent over the past week boosted by news that OPEC may hold talks with other producers to tackle the oversupply which is depressing prices.