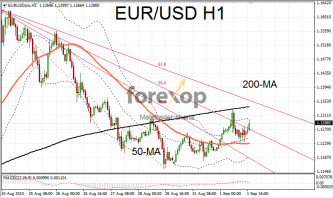 Global markets were rattled by panic again Tuesday after figures revealed the slowdown in China could be much deeper than feared.

Seen by many as a benchmark of the market’s aversion to risk, the VIX climbed back over 31 today. The index rose by 12 percent over the session and although at an unusually high level it remained off last week’s peak of 40.7.

The rally in crude oil was halted in its tracks after the disappointing Chinese data. Brent crude slipped US$3 taking the level back down to US$50.

The US dollar was down more than half of one percent against a basket of currencies. The yen as usual strengthened sharply as a risk-off play. The euro and Canadian also climbed against the dollar but sterling lost ground on disappointing economic data as did most commodity currencies.

The greenback suffered on the back of some mixed economic data. The main disappointment on the day was the latest figures from survey company ISM that showed US manufacturing activity was much slower than expected last month. The purchasing managers’ index slipped to 51.1.

The euro had a relatively strong session on the dollar after climbing to test the 1.13 level. EUR/USD remains above the key support threshold around the 1.1047 area. The downward correction has created some good entry opportunities for long trades and this is adding to momentum. On the four hour chart, the MACD is indicating that the downward correction is exhausting itself with the pair now looking oversold.

Helping the euro to rally was some upbeat economic data. Unemployment fell unexpectedly in Germany last month. Markit’s final purchasing managers’ index rose to 53.3 in August – just beating forecasts. The closely watched manufacturing survey added evidence to the view that that German economy is on a solid footing. This processing is being assisted by a weaker euro and the ECB’s bond purchasing program.

EUR/GBP posted another strong session after Sterling was hit by a disappointing report on UK manufacturing. EUR/GBP rallied by one percent to 0.7375 and looks set to close the day at a three month high.

EUR/JPY failed to gain any upward momentum due to the relative strength of the yen. EUR/JPY slid back to 135.57 before finding support at the 200-day moving average line.