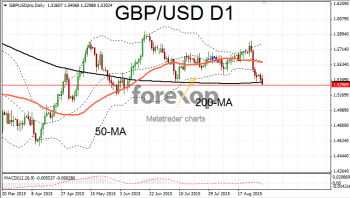 The UK pound is suffering from weak sentiment, compounded today by some worrying figures on the health of the country’s manufacturing sector.

GBP/USD was trending lower for much of the day on the back of the figures with few meaningful retracements. Traders were aggressively testing the 1.53 level which was offering tentative support.

Manufacturing activity in the UK slowed unexpectedly in August according to the Institute for Supply Management. The closely watched PMI was recorded at 51.5 in August, missing the forecast of 52.

More important than this month’s figures however is the fact that the sector has shown a persistent downtrend for the past 18 months. The UK economy remains over reliant on financial services and consumer spending. The strong pound is seen as a contributing factor as well as lower demand in the Eurozone.

One of the biggest losers on the day was GBP/JPY which suffered from a double hit on the stronger yen. GBP/JPY was trading down at 183.30, far below the highs around 196 reached in the summer. The pair fell through a critical support area around 185 as bearishness looks set to continue.

The Australian dollar was trending lower after yesterday’s decision by the central bank to keep interest rates at 2%. AUD/USD was testing six year lows around 0.7039 driven sharply lower by concerns around China’s slowing economy. Figures released today revealed the manufacturing sector is contracting.

At 47.3 in August, the Caixin purchasing mangers’ index remains well below the 50 level (which marks expansion). The level marks a six year low. The Chinese data rattled already nervous markets and sent commodity futures tumbling taking currencies exposed to the sector with them.

The Canadian dollar bucked the trend after data showed that GDP was ahead of expectations in the second quarter. Canada’s gross domestic product shrank by 0.5 percent in Q2. CAD received a boost however as this was far less than the one percent contraction that was expected.