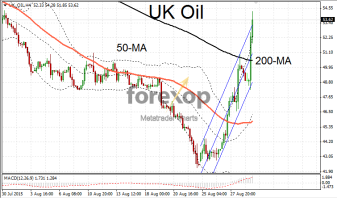 Oil was one of the big movers of the day. Brent crude has rallied US$11 in the past week taking the price of the front month contract back up to $53.64.

Markets cheered news that OPEC may talk to other suppliers in an effort to curb the global production glut. A faltering Chinese economy continues to pressure commodity prices as producers struggle to cut output to meet the lower demand.

The Canadian dollar, one of the usual beneficiaries of rising oil prices, was quick to rally against the US dollar. USD/CAD slipped back to 1.3166 well below the highs of 1.33 that were hit last week. This came despite Canadian trade figures showing that the country’s current account is in worse shape than many predicted. The deficit stood at 17.4B Canadian dollars in July, more than 0.5B dollars above the expected figure. This was still however a narrowing from the previous month’s deficit of 18.2B dollars.

Bearish sentiment on the Australian dollar continues with AUD/JPY failing to break above the 90 barrier. AUD/JPY was trading towards the middle of the 86-range. Two weeks of heavy losses have pushed the pair down by over six percent.

The Australian dollar faces a fierce set of headwinds. The slowdown in demand from the Chinese construction industry has sent the commodities sector towards a hard landing. The Australian central bank (RBA) will announce its interest rate decision later tonight as well as release its regular policy statement. Interest rates are expected to be kept on hold at 2 percent. If rates are indeed kept steady we may see something of a relief rally in AUD as traders pull back risk positioning.

Overnight there will also be an update on the latest state of the Chinese manufacturing sector. The purchasing managers’ index for the sector is expected to show a small decline to 49.7 in July. The services PMI is also due later.