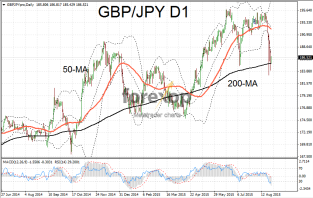 The dollar corrected higher against the British pound today – as the greenback pulled back losses suffered at the tail end of last week.

Cable (GBP/USD) was trading below 1.54 again after briefly touching 1.58 on Monday. This brings the correction to 2.6 percent on the week.

The sudden movement, triggered by risk aversion and a re-evaluation of interest rate policy, took many traders by surprise. This aggravated the correction as traders scrambled to cover short dollar positions.

Weak demand in China as well the yuan devaluation is likely to reduce inflation pressures and hence many analysts are predicting that interest rate rises in the UK will come much later than original thought. A rate rise towards the end of the year or early next now seems improbably. A more likely course will be the summer or the autumn next year (2016).

Official growth figures due on Friday are expected to show the UK economy grew by 2.6% in the second quarter from the previous year. Also due for release but keenly watched will be the latest numbers on total business expenditure. Markets are expecting that growth in business spend held static at 0.7% over Q2.

GBP/JPY rebounded against the yen after seven days of severe losses. GBP/JPY bounced back to 186.38 where some support was met – though not before breaching the level several times. The pair still remains in a bearish pattern however.

After such a deep correction GBP/JPY typically overshoots the resistance/support lines by some distance. Therefore we could see further selling pressure in the near term taking the pair lower before a more significant upward retracement is seen.

EUR/GBP was trading at 0.7296 after undergoing another choppy session. Both the euro and sterling are being buffeted by strong fundamental influences which are also bringing some good trading opportunities.

The pair fell for a second day on Thursday as British pounds had the upper hand. EUR/GBP is following a similar path to EUR/USD and is likely to find support around the 200-day moving average line – presently around the 0.7257 area. If we see an upwards retracement at or near that area that could signal the formation of a new upwards trend.

In the calendar for the euro on Friday will be a raft of leading business indicators and a survey of consumer confidence.