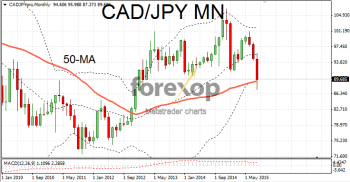 The Chinese Central Bank cut interest rates by a further 25 basis points today and reduced the amount of reserve funds that banks must hold – effectively freeing up more liquidity.

The move was aimed to stimulate the Chinese economy and stem the stock market rout that’s been in effect since the summer. The Shanghai Composite fell a further 7% today in a bear market that’s looking every bit as severe as the Wall Street crash of 1929.

Oil continues to trend lower on the back of the gloomy outlook in the world’s second biggest economy. Brent crude is now trading at a six year low of $42.77. Industrial metals were mixed on the day after suffering steep losses yesterday.

The Canadian dollar has suffered heavily amid the weaker oil price. USD/CAD was trading above 1.33 – an eleven year low for the Canadian loonie. CAD/JPY meanwhile stabilized after yesterday’s deep lows. The pair was trading down as far as 87.37 before finding long term support at the 50-month moving average.

The slump in Chinese equities and with fundamentals driving oil prices lower, the Canadian looks set to remain in a bearish frame for the foreseeable future. CAD/JPY has been an especially good short trade recentl because yen is traditionally stronger with lower oil prices (Japan is a net importer). But also because of the safe haven flows that are being driven by the recent market uncertainty.

The global fear index or VIX reached a four year high yesterday. The VIX reached an extreme level – over 43 – on Monday. This level hasn’t been reached since the Eurozone crisis of 2011. The VIX fell back to 30.5 today, though still an extremely high level indicating a level of heightened uncertainty in the market.