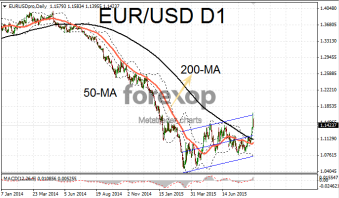 The euro was trading just off its recent high against the dollar as the greenback rebounded from sharp losses suffered at the beginning of the week.

Reaching an intraday high of 1.1713 yesterday EUR/USD reached its highest point in over seven months. On the daily chart the pair is trading clearly above the 200-day moving average and has broken above the downwards trend that’s been the dominant pattern since early last summer.

Bullish sentiment in EUR/USD looks set to continue in the medium term as markets pare back their expectations for the first US rate hikes. Today’s rate cut by the PBOC as well as the deep selloff in Chinese equities look set to cause enough concern for the Federal Reserve to hold back on its first rate increase in nearly ten years.

USD/JPY was trading near seven month lows this week after investors and traders moved into the yen as a relative safe haven play. USD/JPY fell as much as seven percent before recovering back up towards the 120 level today as the dollar rallied. Markets stabilized somewhat after intervention by the Chinese central bank.

Cable also had a mixed session as markets pull back their interest rate expectations in line with those of the US. GBP/USD gave back much of the gains won yesterday and fell back below 1.57. GBP/USD began to turn downwards as the US session got underway and some respectable data from the consumer sector was received.

Data from the US was mixed today though overall markets were in dollar buying mood as the greenback remains in a heavily oversold state. The flash purchasing managers’ index for the services sector has fallen to 55.2 in August from 55.7 a month earlier.

In signs that the property market may not be as robust as expected the S&P/Case-Shiller Home Price Index reported a 5% annual increase to July – again just missing the forecasted 5.1% rise. On the positive side, US consumer confidence, the driving force behind the economy, remains extremely upbeat. The Conference Board reported a rise to 101.5 in August, sharply higher than the 93 reading of the previous month.

From the Eurozone we’ve seen some further encouraging signs that Germany’s economy is accelerating. German sovereign bond yields put on their biggest one day gain in more than two months on Tuesday after a recent survey showed a strong rise in business confidence. German businesses view both the current situation and the future conditions as better than a month earlier according to IFO’s latest business surveys.