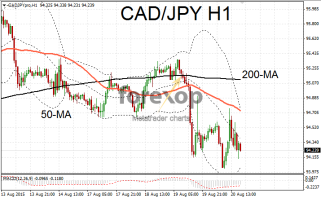 Cable rallied today gaining support from some positive data on the UK economy and after the US dollar slumped. The greenback weakened following the release of the FOMC minutes.

An early selloff hit cable after a report showing that retail sales failed to grow as strongly as expected. GBP/USD dropped 0.5% to 1.5605 before rallying back to a level close to the previous high. Markets however were boosted later by several encouraging reports on the UK economy. The CBI survey reported improving confidence among UK businesses. Mortgage lending also grew according to a report from the CML.

The main dampener on Sterling however was the retail sales numbers. UK retail sales grew by a rapid 4.2% in July. According to the report from the Office for National Statistics sales were up by 0.1% in July and up by 4.2% on the year – the same as the previous month.

Though strong, the data missed expectations by a notch. Markets were looking for a 0.4% increase in July. Sales in household goods were strong according to the report, but fuel and clothing sales were down.

Markets became somewhat risk averse after a further day of heavy losses on Chinese equity markets. Confidence in the ability of the Chinese authorities to stem the rout was also low and kept traders on edge. Commodities saw another day of heavy losses. Brent crude was trading down at US$46.4 before recovering some lost ground.

CAD/JPY – a close proxy for oil price fluctuations – has slumped for all but one of the past eleven weeks. CAD/JPY now trading at 94.32 has fallen over six percent since June. On watch will be tomorrow’s inflation report from the Bank of Canada. The Australian dollar suffered another down day falling to 0.7323 against the greenback.

EUR/GBP slid back to 0.7137 as the euro outperformed sterling. Sentiment in the euro is on the rise now that the risks of a Greek exit from the Eurozone have subsided considerably.

Greek Prime Minister Alexis Tsipras resigned earlier today and called a general election to be held in September. The Greek leader lost his parliamentary majority after a number of backbenchers rebelled after the acceptance of the third EU bailout package.

A raft of critical Eurozone data is due for release tomorrow. Germany’s manufacturing PMI is expected to show a slight fall to 51.7. The Gfk survey is also expected to show that business confidence remained steady at 10.1.