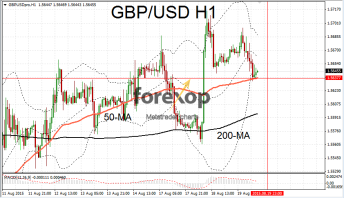 Cable had another choppy session today with a lack of any clear direction.

Disappointment on US consumer inflation figures helped GBP/USD to pick up momentum midway through the session and lift up to 1.5653. Support was found around 1.5637 but there was no real drive to push any higher ahead of the release of the FOMC minutes.

The EIA reported an increase in US crude supplies of 2.62M barrels. Traders had expected the weekly summary from the Energy Information Administration to have reported a small decline. Oil futures tumbled sharply. Brent crude futures fell by three percent – the move of US$1.5 took the front month contract down to US$47.

Commodity currencies suffered another brutal selloff amid fears over China and the state of the country’s economy. Traders have been increasingly anxious over the extreme volatility seen in the stock market. Chinese equities have seen massive inflows from the growing middle classes in the country. Heavy losses are likely to dampen demand in the already slowing economy. To add further the domestic housing market appears to dangerously out of kilter with fundamentals, and that adds an additional risk factor.

The Canadian dollar also suffered heavily under the falling oil price. USD/CAD was the main casualty. The greenback pushed nearly one percent higher taking the rate up to 1.3159. Canadian inflation numbers are due on Friday as are retail sales figures.

However recent data has surprised on the upside as early interest rate cuts by the Bank of Canada helped the economy to weather the impact of falling commodity prices.