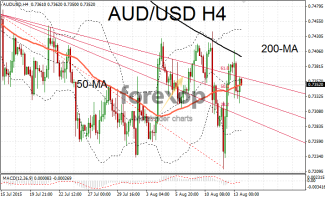 The US dollar was mixed against most commodity currencies on Thursday.

USD/CAD continues to swing wildly with large levels of intraday volatility. The pair rose back above the 1.30 line again today after rallying one percent on yesterday’s dip.

Traders viewed the strong US retail sales and strong inventories growth as a sign that the Federal Reserve will remain on track with its interest rate schedule. This came despite some relatively upbeat data from Canada. The house price index climbed for second month – offering a sign that the economy remains resilient despite the slump in commodity prices.

Chinese authorities altered the yuan’s trading band against the US dollar for a third day running. The yuan is currently permitted to trade within a fixed band against the dollar but authorities have said that they will move to a new system whereby the band is moved according to the previous day’s closing rate. This is seen as the PBOC gradually migrating to a fully floating exchange rate system.

AUD/USD failed to carry through on yesterday’s rally and struggled to remain above the support area at 0.7350. Disappointing data from China and the latest intervention by Chinese authorities in currency markets (see above) continues to have a dampening effect on the Australian dollar. These fundamentals are also driving the New Zealand dollar down to levels not seen since last decade.

In addition the kiwi is suffering due to a disappointing outlook on global demand for its dairy produce. Now trading around 0.6561 NZD/USD has shed nearly 18% since the start of the year.

Brent crude oil dipped for another day running and remains firmly below the psychological US$50 level.