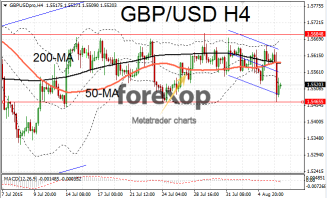 Sterling took a knock today after the Bank of England issued its latest policy statement.

Cable dropped to support at 1.5465 before consolidating and then retracing some of the fall. EUR/GBP fared even worse as the strong euro rallied back against the bearish pound. The pair lifted clearly above the 0.7000 area and was trading around 0.7038.

The area around 0.7000 has been creating resistance to any upward momentum and today’s news gave enough of a lift for a decisive upward break. Against the yen GBP/JPY fell back to 193.71 giving back all of yesterday’s gains.

In his press statement Governor Mark Carney’s remarked on the strength of the currency and how this could affect policy. This was seen by markets as a potential blocker to earlier interest rate rises. GBP/USD tumbled nearly one percent on the remarks which led traders to reduce their bets on a rate rise towards the end of the year. Most analysts are predicting a rise in the first half of 2016 despite hawkish remarks last month from the Mr. Carney.

This view was strengthened after the bank’s latest inflation report which predicted a lack of inflationary pressure in the immediate future. It also predicted that inflation was unlikely to return to the target 2% range until 2017 – this factor together with the stronger currency will likely see the bank holding off on its first rise.

The Bank of England delivered its monetary policy decision under a different format this time. For the first time it released the statement, inflation report and minutes of the meeting all on the same day. In the past the minutes were released two weeks after the meeting of the committee. The minutes showed that all but one of the nine-strong committee voted to keep rates on hold at 0.5% – a level that’s been held since 2009. The decision was widely expected but markets had anticipated that possibly two of the committee would have voted for a rate rise.

Markets were looking for a strong rebound and the consensus was for a 2.2% annual rise. The drop was caused by an especially weak month for the oil and gas sector. The data added a further drag to sterling as UK manufacturing continues to lag well behind the services sector in terms of overall contribution.