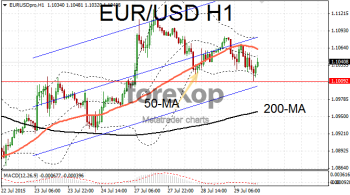 The US dollar rallied briefly after the Federal Reserve confirmed that it is on track to lift interest rates in the later part of the year. The message didn’t offer any surprises but was broadly supportive towards the greenback after traders pulled back short covering positions giving the dollar a temporary bounce.

Interest rates were held fixed, which was widely predicted, but the FOMC left the door open to lift rates off near zero levels – a process which is widely anticipated to begin as early as September. Yields on US treasuries were unchanged.

EUR/USD traded within a tight range between the day’s pivot levels with support at 1.10 and resistance at 1.1078. The market fell to the bottom of the range on the Fed’s release before support was established again and the pair lifted to the mid-1.10 range.

The euro received some mixed economic news. Sentiment among German households remained flat in June according to a recent survey by GFK. The closely watched confidence index stood still at 10.1 just off the peak seen in May. German households remained relatively upbeat last month due to solid jobs prospects and rising wages. The confidence index remains at historically high levels reflecting the degree of optimism among German consumers.

The number was in line with the consensus forecast and therefore had relatively little impact on euro rates. The euro eased lower ahead of the release of the Fed’s monetary policy statement as traders were nervous of placing big bets against the dollar.

French consumer confidence also issued today marked a slight decline to 93 from 94 a month earlier. Spanish retail sales also disappointed. At 2.3% p.a. in June retail sales were well short of the 3.3% growth that was anticipated.

In the US home sales disappointed registering a sharp decline of -1.8% in June. The data surprised markets which were looking for a rise of 1% on the month. On the positive side agents reported that the fall in sales was due to a shortage of new homes appearing on the market rather than lack of demand.