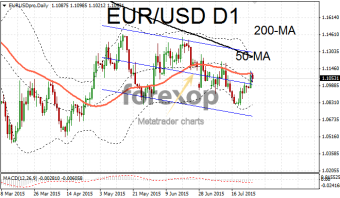 The greenback traded on relatively solid ground today despite a mixed set of economic data. The dollar was up against the yen and the euro but slipped versus the UK pound and fell sharply against the Canadian dollar.

Activity in the US services sector increased in July according to the latest preliminary figures from Markit. The closely watched purchasing managers’ index rose solidly to 55.2 in July from 54.8 the previous month.

Despite the robust economy and strong labor market US consumer confidence fell abruptly in July. According to the latest figures from the Conference Board consumer confidence dipped to 90.9 from 99.8 a month earlier. This was well below the number of 100 that markets were anticipating.

A further dent in sentiment towards the greenback came on the release of the house price index. The monthly S&P/Case-Shiller survey missed forecasts and posted a 4.9% annual rise in May. The forecast was for a 5.6% increase.

EUR/USD failed to hold onto the 1.11 level and descended again back to 1.0888. There was little incentive to push the market either way and in the end dollar strength won over.

Markets are trading nervously ahead of tomorrow’s announcement from the Federal Reserve. There’s also a slew of economic data due towards the end of the week. The flash estimate for second quarter US GDP is due on Thursday. The markets will be looking for a number of 1.5%. Nonfarm payrolls and weekly earnings data are also due next week (Friday 7 August).

USD/JPY bounced back to 123.55 but eventually succumbed to profit taking and slipped back to support at 123.47. The yen drew strength as a safe haven play as markets become increasingly anxious over the state of the Chinese financial system. The main Chinese stock index slid another 1.7% today bringing the weekly decline to over 10%. 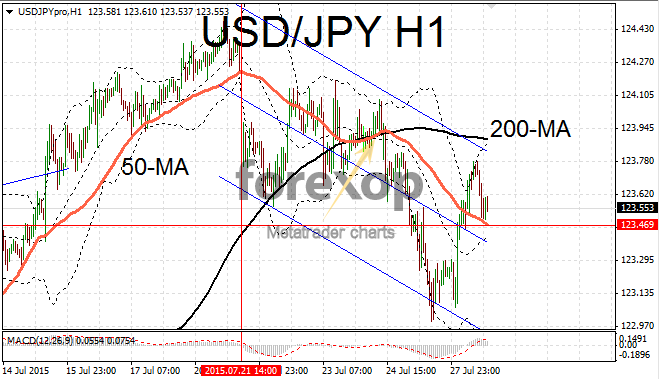 The Canadian dollar had its best day in nearly three months after a surprise increase in the price of industrial products. USD/CAD dropped to 1.2925 after a report showing that the Canadian product price index jumped 0.5% in June on the previous month. The data reflects higher prices that Canadian companies were able to charge for fuel related products.

AUD/USD climbed nearly one percent to 0.7332. NZD/USD is also finally seeing some bullish activity now that the interest rate decision is behind us and most of the bad news is out there (see below). The pair lifted up to 0.6693 which makes a rise of over three percent since the floor of 0.6496 was reached. Fundamental headwinds remain on the kiwi from the regional slowdown as well as depressed state of the dairy industry.