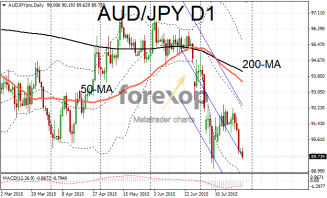 Commodities took another beating today after China’s main stock index the Shanghai Composite plunged by 8.5%. The Chinese authorities have staged a massive intervention in recent months to try to stabilize the stock market.

Rumors that the intervention would be scaled back caused another black day for stocks and the falls sent shockwaves rippling through global markets from stocks, to commodities to bonds. Metals were distinctly bearish as was crude oil.

The falls would have been more severe but the turmoil in Asian markets also had in impact on the US dollar. The Fed’s policy statement on Wednesday will be closely scrutinized for clues as to whether the global events will cause the Fed to hold off on its course of rate rises which are expected to begin in September.

AUD/USD rebounded at the support at 0.7264 and climbed up to 0.7324 at which point momentum fell way. NZD/USD also put on a minor retracement lifting back to 0.6612 though the pair remains depressed levels not seen since 2009.

USD/CAD remains above the 1.30 level despite falling briefly into the upper 1.29 area. GDP figures are due for release on Friday and are expected to show that the struggling Canadian economy remained flat last month.

The yen was stronger and this helped keep commodity currencies suppressed against the Japanese currency. CAD/JPY saw another down day falling to 94.56. AUD/JPY also failed to remain above the 90 level. The pair broke through support and slid down to 89.74 thus deepening the bearish descent.