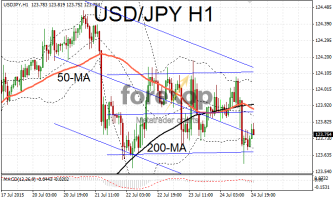 Yen is trading strongly against the greenback with USD/JPY ending the week back down at 123.88.

The hourly chart is ranging in a sideways pattern but Friday’s move took the pair down below the key moving average lines which had been providing support for much of last week.

The yen rallied in the wake of an IMF report on Friday. The IMF warned that Japan should prioritize its reform program again popularly called “abenomics” and not to rely on a weaker yen to solve its economic stagnation.

Bank of Japan’s governor Kuroda also gave a bullish speech earlier in the week but this had a muted impact on the currency. With the country’s economy highly sensitive to exchange rates the Japanese central bank is traditionally not shy about trying to influence markets. The recent remarks from the IMF have highlighted limited effects of this policy.

The latest move could see USD/JPY testing lower support at 123.44. Midweek will also see the release of Japan’s latest industrial production figures expected to show a 0.4% rise on the previous month. A strong number could see the downside in USD/JPY being tested further however the more dominant influence will could be the FOMC statement on Wednesday.

The strong yen also pushed back against commodity currencies. AUD/JPY fell 0.8% until support was found at 90.08. The move erased all of the gains the Aussie had won over the past two weeks.

NZD/JPY fell back to 81.31. The kiwi had rebounded as high as 82.83 following the decision by the New Zealand Reserve Bank to cut interest rates by 25bp. The latest move has pushed the pair back into the bearish channel and curtailed any hopes of an upward breakout. 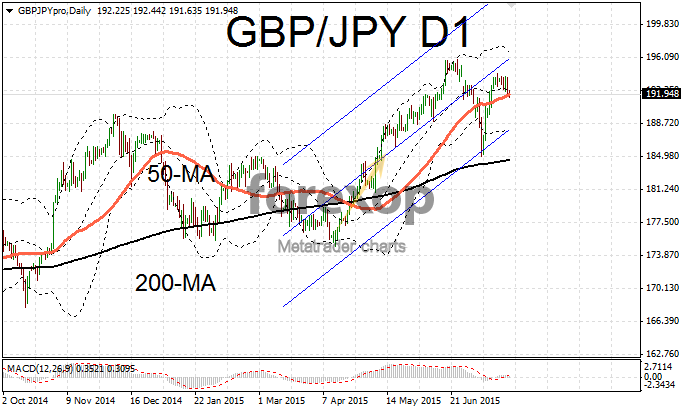 GBP/JPY found support at 191.94 after seeing two days of falls. The pair is still trading within a wide range so there is scope for significant upwards or downwards movement. GBP/JPY has been unable to reclaim the area towards the top of the range towards 195.8 since June.

Sterling continues to suffer after disappointing retail sales data last week. GBP/USD fell back to 1.5465 but a late recovery took cable back above the 1.55 line.