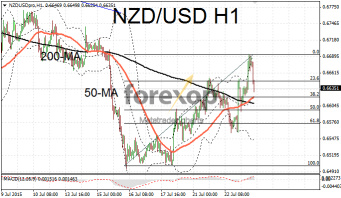 The cut of 25 basis points allowed the kiwi to rally as traders recouped the risk premium on the basis that the RBNZ could have cut rates more drastically by 50bp.

The New Zealand economy has been hit by a barrage of headwinds including a global supply glut in its essential dairy products sector as well as a regional slowdown centred on China. Therefore a further cut of 25bp seems a strong possibility.

NZD/USD bounced upwards by two percent from yesterday’s level but pulled back after meeting resistance at 0.6693. The pair fell back to the 38.2% retracement line also meeting support from the key moving averages on the hourly chart.

The kiwi also rose against the yen pushing NZD/JPY back to 82.36. The pair still remains oversold and trading down at the bottom of a descending channel.

The Australian dollar was relatively flat over the session despite volatility at the lower timeframes. After a brief foray up towards 0.7416 AUD/USD descended back to the lower end of the range at 0.7369 where support was established.

A strong set of retail sales figures was not enough to help the Canadian “loonie”. USD/CAD broke above 1.30 for the second day in a row. The 1.30 line hasn’t been visited since 2009.

CAD/JPY which traditionally correlates with crude oil prices bucked the trend on a weaker yen and lifted to 95.4.

Retail sales recorded by Canadian businesses were up by 1% in May, well ahead of the 0.5% that was forecast. Core retail sales (excluding transportation) also beat expectations at 0.9%.

Despite the strong numbers the headwinds facing the Canadian economy as the demand for commodities slows was the more influential factor.