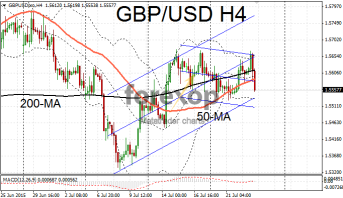 The British pound fell abruptly this morning after the release of a disappointing set of retail sales figures.

GBP/USD fell 0.7% taking the level back into the 1.55 range. An early attempt to break above 1.5662 proved unsuccessful. The pair is finding support at the 50-day moving average (at 1.5554) but on the four-hour chart, support at the key moving averages was easily breached allowing the price to gap down to the bottom of the range.

The trigger for the falls was a surprise drop in UK retail sales last month. According to a report by the National Statistics Office sales were down -0.2% in June on the previous month. That’s sharply lower that the 0.3% rise that was recorded in May and which was also the expected level for June. Sales dropped in the food category, household goods and fuel. Taking the wider perspective sales remained robust for the second quarter rising by 0.7% on the first quarter.

Consumer spending makes up two thirds of the UK economy and a sharp slowdown in sales was enough to make the markets nervous that the Bank of England will hold off on raising interest rates. 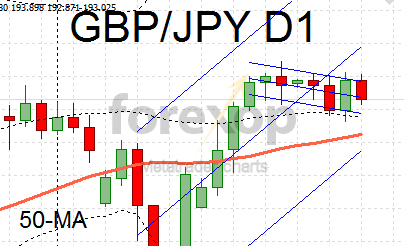 Sterling was more robust against the yen. This was in part due to the Japanese currency experiencing a relatively shaky session following some poor trade numbers. GBP/JPY fell to 192.96 keeping it back within the tight downwards channel that’s formed over the past week.

A strong session for the euro allowed EUR/GBP to jump nearly one percent to 0.7048. This pair has now reversed 50% of the steep losses suffered last week. With rate rises already full absorbed traders turned their attention back to growth stories – namely the eurozone.