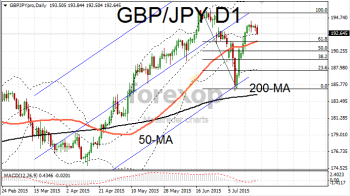 GBP/USD had another tepid session today as weakness prevented it advancing on the softer dollar as did euro and yen.

Cable is resting at the support of the 50-day moving average after experiencing six days of modest falls. It is maintaining its position within the upward (though choppy) rising channel.

Sterling dropped against the yen taking GBP/JPY down to 192.67. The alignment of the 50-day moving average and the 61.8% fib retracement level is expected to provide support around 191.51.

A glance at EUR/GBP shows just how weak sterling was over the day. EUR/GBP advanced over one percent taking the level up to 0.7037.

The Bank of England is due to release the minutes of the last monetary policy committee meeting on Wednesday 22 July. Of interest will be if any of the committee changed their vote – something that could have prompted Governor Mark Carney’s earlier statement in which he hinted at rate rises coming sooner than expected.

Other news flow around sterling was broadly positive. Public sector borrowing continues to fall in line with forecasts provided by the government. The UK government has laid out a target to clear the deficit by 2020 and return finances to surplus. The latest data showed that borrowing came in below estimates in June at £8.58B.