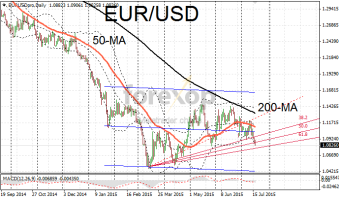 It was another tepid session for the euro despite the ongoing Greek crisis apparently drawing to a close. Greek banks are set to open on Monday following emergency aid from the European Central Bank.

However operations will be far from normal as capital controls remain in place as the financial system aims to restart after nearly three weeks of closure.

Negotiations on Greece’s third massive European bailout will take place early next week. There is also much debate as to whether it would have been better for both parties for Greece to have left the euro – or taken a “time out” as officials euphemistically put it.

Market reaction has been lukewarm to the prospect of Greece remaining and in all likelihood needing “financial life support” for several years to come.

The stronger UK pound sent EUR/GBP down to an eight year low. EUR/GBP dropped to 0.6937 ending one of the euro’s worst weeks in two years.

Sterling gained supports after Bank of England head Mark Carney gave his strongest hint yet that interest rates will probably rise before the end of the year.

Mark Carney gave a surprisingly hawkish speech in which he gave strong guidance that markets should anticipate interest rates rising sooner than expected. Most economists were predicting that the Bank of England would not raise rates before 2016.

Clearly the outperformance of the UK economy has meant that some of this expectation had already been priced into sterling rates. We’ve seen a powerful bull run in GBP/JPY, EUR/GBP and even Cable (GBP/USD) over the past few months.