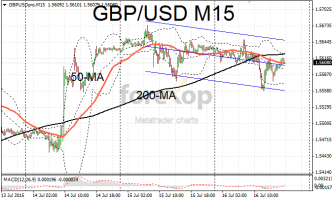 Cable experienced a choppy session but overall was little changed on the day. GBP/USD dropped to support at 1.5557 early on but later recovered to its previous level. The pair managed to remain above 1.56 and within the middle of the sideways range between 1.557 and 1.566. Consolidation looks in order but the overall outlook remains bullish.

The Bank of England Governor increased bullish sentiment this week. Mark Carney said that economy was reaching a point where interest rate rises would be appropriate.

GBP/JPY pushed higher but momentum is falling away. The pair lifted to 193.82 taking it close to resistance which lies around the middle of the 194 range.

The pair remains at historic highs but just short of the peak reached in the middle of June.

EUR/GBP has been trending lower for much of the week and that pattern looks set to continue. The positive story from the recovery in the Eurozone appears to have been absorbed into current levels. Markets are now focusing on risk factors to growth namely Greece and China.

The ECB announced today that it would keep its asset purchases at current levels of 60B euros each month. Consumer inflation figures released today for the Eurozone confirmed expectations by showing that prices didn’t change on the month. The core CPI rose at an annual pace of 0.8% to June.