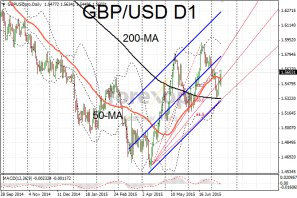 The UK pound rose over one percent after the Bank of England Governor said that the conditions were moving closer to the point where the monetary policy committee may consider raising interest rates.

Speaking in front of a committee of MPs Mark Carney said that the economy was consistently outperforming and disinflationary pressure caused by the strong pound would likely be offset by domestically driven price rises.

The headline rate of consumer inflation fell flat in June. Data released by the Office for National Statistics showed inflation falling to zero from a 0.2% rise in May. The rate was just below the forecast of 0.1%. This was due to unexpected falls in the price of food and transportation. The less volatile core inflation came in on target at an annual rate of 0.8% in June.

Cable jumped as high as 1.5634 before falling back below 1.56 but the move placed the market firmly within an upwards channel again. Disappointing retail sales data from the US also acted as a tailwind by dampening sentient towards the dollar.

Sterling moved strongly against other majors breaking through important resistance levels along the way.

GBP/JPY broke resistance around 191 and eventually moved back to 192.198 reaching a nine day high. Resistance around 191 which coincides with the 23.6% fib retracement area will now provide support. A correction from the peak at 195.9 reached in mid-June seemed imminent.

Sterling pushed back against the euro taking EUR/GBP back down to 0.7060. The session proved to be uneventful for the euro with most economic data presenting few surprises.