Home News
OPEC agreed yesterday to its first oil output cut since 2008. Saudi Arabia had to accept to reduce its production and to loosen its demand regarding Iran’s oil output. This decision pushed yesterday’s oil prices by around 10%. 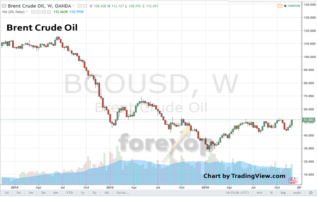 Volatility is still expected on the oil market, especially after the “announcement effect” is over. How can we be sure the deal will be respected? Can oil prices keep going further up?

Another important aspect of this agreement is the cooperation and the participation of non-OPEC countries, who have agreed to cut their total production of 600,000 barrels per day, including a gradual cut of 300,000 from Russia during the 1st semester of 2017. The OPEC and non-OPEC members are scheduled to meet in a few days in order to discuss further details of the agreement.

Crude oil rises over 33% on the year © forexop

This agreement could increase investment in the oil sector if prices stabilize themselves at a certain level – most likely around $50 a barrel. But investors should be careful, as it’s not unheard of for a country to back out of such an agreement, especially as there are no sanctions planned if a country doesn’t respect its production limitation.

Khaled al-Falih – Minister of Energy, Industry, and Mineral Resources of Saudi Arabia – said that there will be a monitoring mechanism to be sure that everyone is operating according to the terms of the agreement, and that non-OPEC countries will join the effort to reduce oil production, though there are no further details about what such a “mechanism” would entail. One thing is sure – investors will be watching closely to see if any country falls out of line…