Home News
Since Donald Trump was elected as the new US President on the 8th of November, the dollar has surged against a basket of currencies. Against the YEN, the dollar had its steepest 3-week increase since 1995. While EUR/USD is now at a 20-month low. 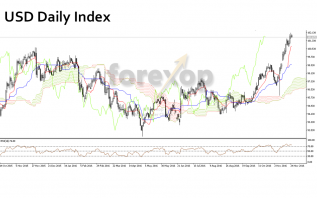 Emerging currencies, such as the Vietnam Dong, the Indian Rupee, the Turkish Lira and offshore Chinese Yuan have reached new record lows against the American dollar.

There have also been drops in other Asian currencies.

Some have reached levels not seen since the global financial crisis.

According to HSBC, there are 4 reasons why markets are currently pushing the American dollar higher:

By the same token, these factors may also drive the US dollar downwards over the long term. We’ve seen a softer approach from Trump since the elections. However Trump’s handling of the Federal Reserve and public debt will be pivotal in this.

Even if we don’t know if any of Trump’s proposals are going to materialize, his tax cuts, deregulation, and infrastructure spending promises are positive for the greenback.

On the American consumer’s side, a strong dollar means that their currency will be able to buy more of another country’s goods or services – which is good for imported products. It’s also good for shopping season and overseas tourism.

On the other hand, American companies that are mainly exporting their products to foreign customers will suffer, as their products will be more expensive abroad. American producers are then disadvantaged in the global market. Those companies may look to compensate by delocalizing their manufacturing sites abroad.

What is keeping the dollar at such a high level – almost a 14-year high? There is now nearly 100% odds that the FED will increase its interest rate in its December meeting. On Wednesday, the FED released the minutes of its November meeting, which was concluded a few days before the American election.

FED members kept interest rates on hold in November, but had commented that the case for a rate rise in the near future had strengthened. They were waiting to see “some further evidence” though, regarding progress toward its dual mandate (full employment and price stability with a PCE at 2%).