Home News
Yesterday, the ONS (Office for National Statistics) released the GDP figures for the 3rd quarter of 2016 (from July to September), which came out slightly better than expected. 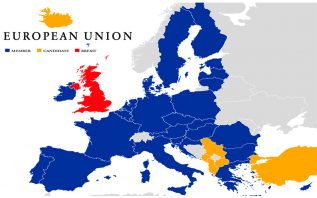 Economic growth in the UK reached 0.5% in the 3rd quarter, after +0.7% in the 2nd quarter. Compared to the 3rd quarter of last year, GDP grew by 2.3%. The statistic released yesterday covers the first full quarter since the referendum on the BREXIT.

June 23rd 2016 was the date that the British people voted for the UK to leave the European Union. This decision has strongly increased volatility and propelled the markets into a bearish movement – especially GBP. GBP/USD is down about 19% while GBP is down about 17% on the Euro.

Major worldwide indexes have now strongly recovered nearly all losses due to investors’ concerns about the future relationship between the UK and Europe. The growth figures show that the referendum has not really caused a sustained shock to the British economy.

But, be careful not to underestimate the impact of the vote on BREXIT on consumer confidence, consumer spending, business investment, employment, and others, as these figures could sharply decrease when the “divorce” officially commences, before March 2017 as recently announced by the British Prime Minister, Theresa May.

In the report from the ONS it is said that,  “The pattern of growth continues to be broadly unaffected following the EU referendum with a strong performance in the services industries offsetting falls in other industrial groups”. The services sector remains indeed a pillar of the British economy, and includes large and prominent industries, such as finance.

As we are talking about finance, there are many risks weighing on this sector. As we said in a previous article, London could lose its status as the 1st European financial market. There are over 250 banks in the City, and several of them are already working to redirect their activities to other European cities.

The City has a “European financial passport” with which a financial product can be approved only by one regulator to be sold in all European countries. If London doesn’t have access to the Single Market, then the advantage is lost and that may force many financial groups to relocate their activities to maintain their access to various European countries.

Everything will now depend on the degree of access to the Single Market in terms of goods, services, and people, as well as business regulations, which will be discussed during BREXIT negotiations’ talks. Investors worry about recent indications that Theresa May is leaning towards a hard BREXIT, as she prefers controlling immigration than having access to the Single Market…