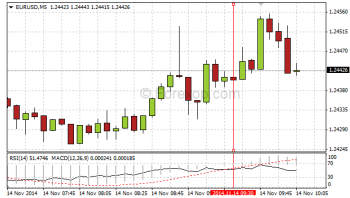 German GDP figures released this morning showed the economy grew by just 0.1% in the 3rd Quarter. Another negative quarter would have technically tipped the German economy into recession. The Federal Statistics Office (destatis.de) reported that consumer spending increased and there was a slight improvement in the balance of trade over the quarter due to better exports. Negatives though included a reduction in capital investment, especially in the machinery and equipment sector as well as construction.

The reaction on the Euro, battered in recent months, was muted, rising to 1.2452 against the US Dollar. However some traders saw the gains as an opportunity to short, and EUR/USD struggled to gain any upward momentum.

The stagnating scenario in the Euro zone is likely to affect the UK – weighing on Sterling, a factor that the Bank of England addressed in its announcement yesterday.