The Bank of England released its quarterly inflation report yesterday, with governor Mark Carney indicating that inflation is likely to fall temporarily below 1% in the months ahead. The CPI figure for September was at 1.2%, well below the Bank’s 2% target.

Sterling fell sharply as the market digested the news and anticipated a further push-back of the first interest rate hike since the financial crisis. Traders also paid keen interest to Mr. Carney’s opening statement which gave a picture (not entirely unexpected) of weaker outlook than previously forecast, as well as concerns about stagnation and falling confidence in the Euro Zone.

German third quarter GDP figures are due out on Friday, and are widely expected to show the German economy is close to recession. There’s clearly a great deal of pessimism reflected in the Euro at the moment – although better than expected data could see a short-term reversal in this downtrend.

Declining commodity prices as well as the prospect of interest rates remaining low for the foreseeable future will give some welcome relief to consumers in the UK, who’ve been squeezed as wages have failed to keep pace with inflation. Consumer confidence however is also expected to be lifted by consistently improving employment figures.

Sterling has been in a declining trend since the release with GBP/USD falling through 1.58 overnight and now testing the 1.57 levels. 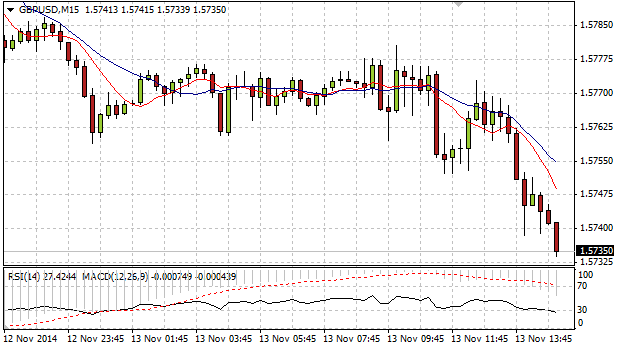 The decline in sterling is as much in anticipation of the weaker growth as it is the timing of the first interests rate rise. The economic picture started to deteriorate somewhat in August/September. The markets widely expected rate rises as early as the end of 2014. That now seems unlikely until next autumn.

The NIKKEI-225 continues its strong performance posting another gain of 0.5% on Wednesday consolidating Tuesdays’ gain of over 2% and pushing it to a 7 year high. The Nikkei was propelled higher by the announcement on Tuesday of a delay in the introduction of a VAT hike as well as the backdrop of an expansion in QE announced by the BoJ last week. Japan, being a net importer of energy will also benefit from substantially lower oil prices.

The news continues to drive the Yen lower against the US Dollar and other major currencies.  AUD/JPY, a popular pair for currency carry traders, has been one of the strongest performers of the year – rising nearly 8% as traders continue to make bets against the Yen and profit from cheap money. Open interest in futures however has fallen during the past week suggesting a pullback could be imminent. 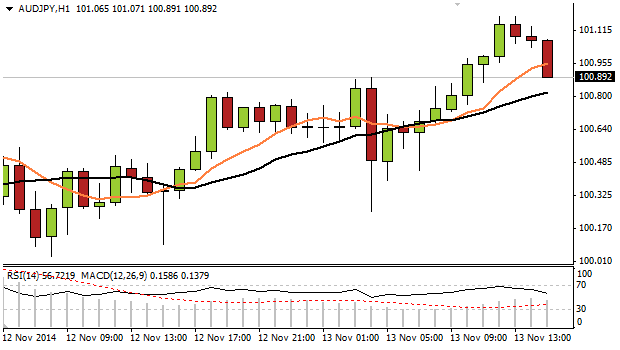 We are still bullish on the AUD/JPY in the medium term. The pair is hovering around the 100.971-101.148 range but we are watching the pivot points for possible reversals around 103.71 and buy into dips for carry opportunities.