A turbulent week in the markets saw global stocks and commodities suffering heavy losses. There were also some big movements in USD, JPY, AUD and NOK. Implied volatility, seen widely as a broad measure of risk aversion, spiked by 66 per cent.

Falls in crude oil prices were the catalyst, as oil plummeted below $60 per barrel for the first time in five years. Traders are alarmed, not so much by the steep declines in oil futures, but the shifting financial landscape that this is creating. There is still much uncertainty around who will be the winners and who will be the losers. 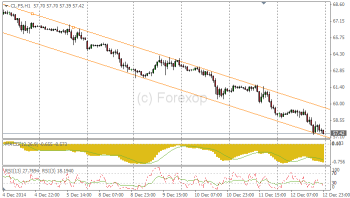 Several factors are unsettling the market. Firstly, data released last week suggests that the slowdown in Asia, especially in China is worse than feared. Industrial output came in at 7.2 per cent versus a consensus 7.5 per cent. This might not sound like much, but it is already having a knock-on effect in other economies in the region and globally which are heavily dependent on demand from China.

Secondly, OPEC failed to appreciate the scale of the US shale gas revolution. Trying to maintain its market share and dominance, it refused to cut back on production over the last few years. Even though maintaining an artificially high oil-price led to a boom in new exploration and drilling operations. This oil has come to market just when global demand is slowing. The IEA forecasts that demand will fall to its lowest level in a decade.

The falls in oil prices are shifting wealth from the petro-producing nations, to consumers. While lower oil prices can provide a boosts to spending and economic growth, traders fear the destabilization effect the rapid falls will have on nations heavily dependent on oil exports.

Moreover, there is the deflationary effect that falling energy prices are going to have, possibly pushing some European countries over the edge.

The sharp falls in oil prices leave the commodity deeply oversold; we are expected to see a short-term retracement, possibly this week.

While falling energy prices might seem good for consumers, the rapid drops we’ve seen can be damaging, especially for stagnating, debt-laden economies in Europe.

Data last week shows that France is already sliding into deflation. Spain and Italy are not far behind. France’s core inflation turned negative, while their jobless rate stands at 10.4 per cent. Unemployment in Italy is 13.2 per cent.

There is a risk that falling energy prices could push Europe closer towards a deflationary spiral like Japan suffered. In this scenario, the real cost of their debt will increase, making growth even more difficult.

Among the biggest losers of the rout in oil-prices have been commodity currencies such as the Australian Dollar, Canadian Dollar and the Norwegian Krone.

The Krone fell sharply as Norway’s Central Bank, the Norgest, cut its interest rates by 25 basis points to 1.25 per cent. This was the first interest rate cut in two years. In its statement, the Central Bank said that the economy is on track but it is taking preventive measures. Oil and gas revenue make up 20pc of the country’s economy. The Australian Dollar also fell after National Australia Bank cut their growth forecasts.

A very busy trading week lies ahead. We suggest putting the following events in your diary.