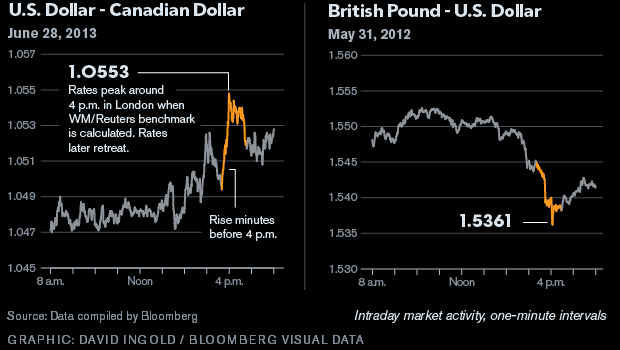 Barclays is the latest bank to suspend traders in an alleged “massive” foreign exchange rate rigging scandal that involves manipulation of the daily closing fixes. This follows suspensions of two traders at RBS (Royal Bank of Scotland) yesterday.

Earlier in the month an inquiry was launched into whether Swiss traders were involved in manipulation of the 4.00 p.m. London closing fix – or WM/Reuters rates.

The investigation seems to be growing with reports that several banks are now being sued.

Just as with the Libor fixing scandal, manipulation of the benchmark currency fixes has far wider implications than foreign exchange alone.

These fixings are used to determine “next day” dealing rates for the bank’s customers, for settlement rates for a whole menagerie of forex derivatives, as well as dozens of other financial instruments that track foreign exchange benchmarks.

The ability to move the closing currency rates, even by a few points, could be monumentally significant. It could be used to “swing” the settlement outcomes of billions of dollars worth of derivatives contracts and other products.

This could potentially allow the bank’s to make enormous “illegal profits”. Not to mention, the potential to profit from orders of ordinary customers.

Bloomberg reported earlier in the year their concerns that currency traders were “messaging” each other specific details about their positions – and in unusual spikes around the time of the daily fixings.

In my view, this news can only fuel doubts about the integrity of the currency markets. At present these are only allegations. However I’ll be keeping a close eye on developments, and writing about them here on forexop.